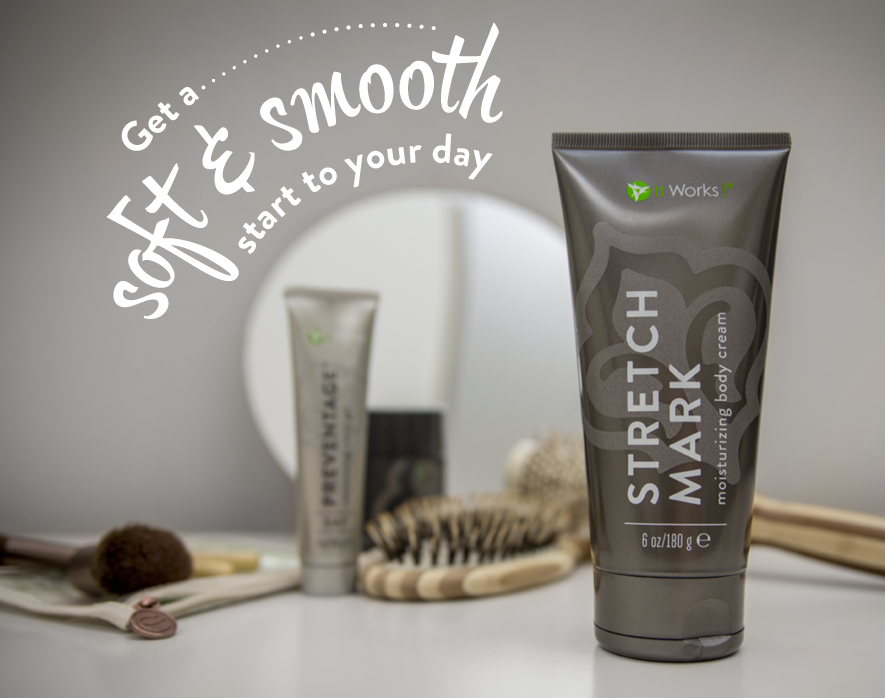 Of course the company that makes a product will always claim that it works.

But who can you trust?

One company has taken their claims to a whole new level and named their brand “It works!”…… just in case we were wondering.

Does It works stretch mark cream do as its name suggests? Can it really get rid of stretch marks? Or is it another gimmick? Let’s find out.

What is It Works Stretch Mark Cream?

The cream itself claims to be non-greasy and full of skin hydrating botanicals.

That’s not all though.

It works stretch mark cream is also supposed to bolster skin elasticity and rejuvenate the surface layers; having an anti-aging effect as well as diminishing those horrific stretch marks.

This smooth, lightly scented cream claims to improve the overall look of skin and skin tone.

Scars and fine lines have in some cases also been erased by it works stretch mark cream.

Looking at what goes into the cream, I have to say I was quite impressed.

It contains some of the major players in skin cell renewal ingredients.

What type of ingredients go into the it works stretch mark cream?

A majority of the credit for the amazing results that some consumers have had with the it works stretch mark cream goes to the super skin moisturizing ingredients.

Jojoba seed oil is a wonder serum in and of itself.

Jojoba seed oil assimilates with human sebum because it is structurally and chemically similar.

The human sebum is oily or waxy matter naturally secreted through human beings’ sebaceous glands in the skin.

Sebum coats and lubricates skin and hair to protect the inner layers from damage by the sun, wind, heat, cold and contamination from the environment.

Lavender is a soothing scent which will also help with relaxing in order to store enough energy for cellular rejuvenation.

Hyaluronic acid replenishes skin’s ability to hold moisture and look supple and full as a result.

Hyaluronic acid in it works stretch mark cream essentially smoothes out the crevices in the skin that are caused by stretch marks.

It helps skin retain collagen and engage elasticity thus strengthening the skin and its ability to stretch without tearing.

These plant hormones have anti-inflammatory properties.

As a results skin that is being stretched becomes less inflamed and strengthened.

Mimosa bark is another botanical ingredient in it works stretch mark cream.

Mimosa bark has been used historically by the Mayan peoples as a treatment for burns.

One can assume that mimosa bark is used in it works stretch mark cream as an anti-inflammatory.

Horsetail extract is a bit of a mystery ingredient in it works stretch mark cream.

Horsetail extract is from a plant and traditionally used to treat edema, or the build up of fluid in and around the kidneys.

Perhaps horsetail extract is an ingredient in it works stretch mark cream as a means of fluid retention in the skin layers.

Increased hydration is also key in the promotion of cell growth.

Licorice root extract is a power player in it works stretch mark cream and moisturizer.

Licorice root extract is often used in the treatment of dark spots, under eye circles and varicose veins.

It contains glabridin, a concentration of flavenoids with an antioxidant set of properties.

Antioxidants can help by limiting the production of free radicals (which is any single atom or molecule that has a single unpaired electron in the outer shell causing it to steal electrons from nearby atoms and molecules, destabilizing them).

This domino effect can cause serious cellular damage and the breakdown of proteins through cellular oxidation.

It works stretch mark cream contains antioxidants which fight the “bad stuff” that damages your cells.

How is it applied?

Consumers are directed to apply the it works stretch mark cream morning and night to cleansed skin and massage the cream into the skin until it is fully absorbed.

It should be noted that the company has a disclaimer to avoid applying the cream to damaged or severely dry skin.

Evidence also suggests that applying the it works stretch mark cream over layers of dry skin will be less effective.

This is because the cream’s ingredients are less likely to absorb into the deeper layers of skin where collagen is produced.

Because of this, it is wise to gently exfoliate the skin where the stretch marks are apparent.

After, gently towel dry and immediately apply the it works stretch mark cream.

What do other customers have to say about it?

On average, more people liked it than not.

The positive reviews are impressive and inspire much hope.

Many women claimed to have seen results in as little as two weeks.

There are also dozens of claims that the it works stretch mark cream reduced the appearance of stretch marks to near invisible.

Reading through more than 80 customer reviews, I managed to find an interesting correlation.

The people who often mentioned that the small tube lasted for several months; also tended to claim that their stretch marks only faded slightly.

However this is just a correlation.

It is difficult to say if this is caused by applying the it works stretch mark cream too sparingly.

Many reviewers also seemed to have the opinion that negative reviews were probably by customers who had not applied the it works stretch mark cream as frequently or as diligently as directed.

Click here to see all the reviews on Amazon.

What about negative reviews?

Negative reviews of the It works stretch mark cream are a polar opposite of the positive reviews.

Critics claim that the cream is sticky, smelly and worthless.

One review states that “none of the It works products work at all”.

This strew of bitter, resentful claims include remarks that a person would be much better off purchasing some cocoa butter or olive oil rather than wasting their time and money.

Another consumer claimed that the it works moisturizing stretch mark cream made her stretch marks appear even more pronounced.

On influenster.com reviews are equally as polar opposite.

Some reviews rave about the way the lightweight skin-drenching stretch mark cream absorbs easily and nourishes their skin.

Others go on about the intense moisturization and the cream’s ability to fade old stretch marks.

There were several claims that the stretch marks around the legs and thigh region were most greatly reduced in appearance and size.

The negative claims on influenster are passionate and somewhat alarming.

One reviewer seems to feel that she was personally harmed by the company as a distributer.

Click here to see all the reviews on Amazon.

What results can you expect?

There is a lot of mis-information regarding the product on the internet.

Pre-dominantly by sellers or distributors that want to make a commission on product sales.

However there are also others that have worked for the It Works! brand as a distributor and have had a negative experience with the company’s business model.

Of the consumers that saw results; the results seen were generally jaw-dropping.

Raised, crimson, zig zags were reduced to faint crinkles that could be confused for variations in skin tone from far enough away.

The available before and after pictures on the internet of it works stretch mark cream trials are encouraging. 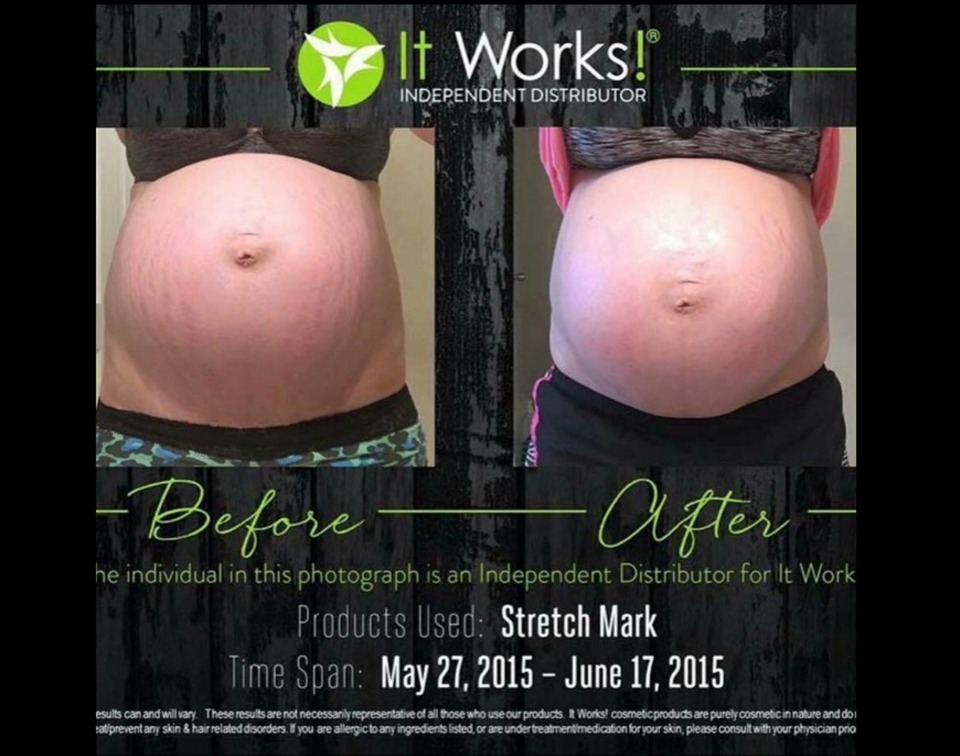 One woman’s nearly inch-thick, plum colored, zebra stripes clawing upward and downward on her belly like stalagmites and stalactites in a cave; were diminished before the baby was even born.

In another case, the before and after pictures showed thick, tell-tale stretch marks covered in a thick layer of hard, crusty, dry skin. 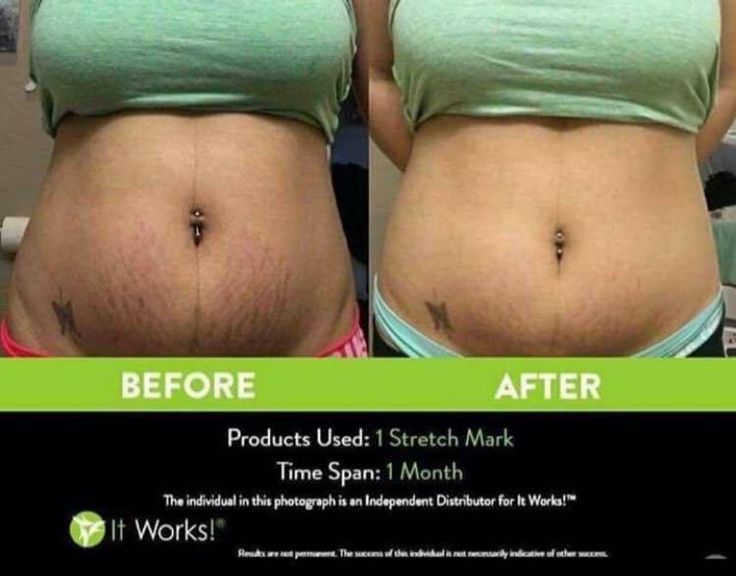 More impressive still, is a photograph of crinkly, loose, crumpled tissue paper-like skin that was transformed into tighter, firmer and smoother skin.

Bear in mind that these are best case scenarios.

Many customers do not experience such dramatic results (only 50% of reviews were 5 star).

Remember to always consult your doctor/dermatologist/obstetrician before trying anything new, especially while pregnant.

What is it about the it works stretch mark cream that could possibly cause these amazing results for so many woman?

The key to getting rid of, preventing or reducing the appearance of stretch marks is to encourage new skin cell growth.

This is so that there are more cells to stretch and less likelihood of tearing at the fibers of tissue.

This tearing causes blood vessels to burst and the appearance of dark stretch marks that fade into a scar-like cluster of silvery trails.

The it works stretch mark cream works best preventatively, if used as directed without skipping treatments and massaged into the skin so as to promote circulation.

After it is recommended to wash and exfoliate to slough off the top layers of dead skin cells that act as a barrier for the it works stretch mark cream to sink in.

The sooner the marks are caught, the better.

Younger skin will tend to recover more likely and more quickly with better results. Skin that is less sun damaged will also tend to have better results.

Remember, diligence and faith are the important factors when purchasing and applying this stretch mark cream.

How can I purchase it works stretch mark cream?

There are a few ways of going about buying the it works stretch mark cream.

It works stretch marks cream is cheaper on Amazon.

However, several reviews state that being a distributer yourself is the cheapest way to get it works stretch mark cream.

Yet, many people complain that being a distributer burnt them and some bad experience has caused them to call it works a pyramid scheme and/or scam.

Still others report that being an it works consultant was the best decision they ever made AND their stretch marks disappeared.

Still one group of former distributers report that you spend more money being a distributer than you ever make back.

The sales package is a $99.00 investment and the pyramid business model requires that you peddle your products to all of your friends and family.

This process can be rather exhausting.

You are also pressured to get your friends and family to start selling beneath you.

Buying the it works stretch mark cream in bulk on Ebay or Amazon can also save a person a few dollars.

However I would aim to try the product out first in smaller quantities.

At $39.00 for six ounces, I would like to be confident that this stretch mark cream will have some effect.

In my opinion, the cream will work to some extent to improve the appearance of stretch marks but the level of improvement will depend on several factors.

Remember to always consult your doctor before trying anything new. 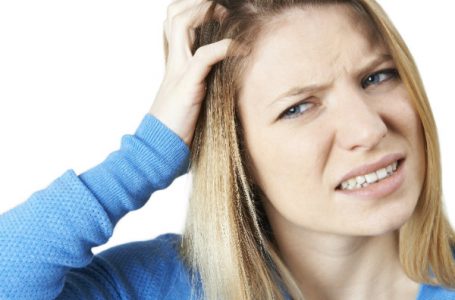 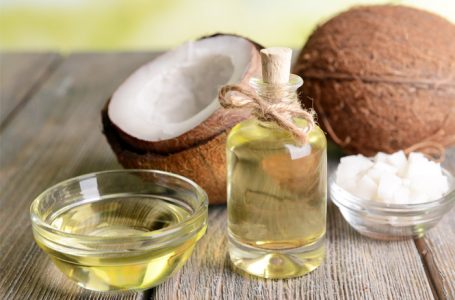 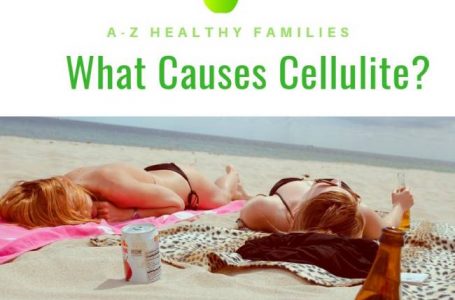 Learn How To Get Rid of Cellulite Fast and Naturally 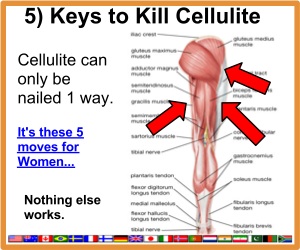