Article at a glance

We hear so much these days about general health and wellbeing, that we’re often bombarded with information.

This can be overwhelming at best, and it can also leave you confused as to which information to listen to, and which to ignore.

Nobody wants to add anything to their diet or daily routine which is going to cause potential harm, either now or in the future, so it’s vital that you read up on anything you’re considering, whether you have any current medical issues or not.

One subject matter which has gained a lot of press over the last few years is around the use of probiotics.

You’ve no doubt heard of these, but do you know much about them?

Do you really know what they are, what they do, and whether you should be using them?

Do you know about possible side effects of probiotic products? Probably not, because so little is actually known!

The problem is, with any new topic which makes headlines, you can never be 100% sure whether this is something you should be incorporating into your lifestyle, or whether it just isn’t suitable for you.

The only answer is to arm yourself with as much knowledge as possible, and check things out with your doctor if you’re not sure.

Where probiotics are concerned, there is a lot of evidence to suggest benefits coming your way, but are probiotics safe?

Let’s explore this subject in a little more detail.

Before we get into taking about the possible dangers of probiotics, we need to really understand what they are; only then can you make an informed decision over whether these supplements are for you.

You will no doubt have heard probiotics referred to as ‘good bacteria’, or ‘friendly bacteria’.

Within your stomach, you have good bacteria and bad.

The good works to counteract the effects of the bad stuff, and overwhelms it in numbers.

This is when everything is within balance, and your digestive health is ticking along nicely.

When the bad bacteria starts to outnumber the good, e.g. if you have a particular digestive issue, or you have caught a virus of some kind, you will become ill and experience symptoms.

In this case, the good bacteria has some extra work to do, to restore the natural balance and order.

Therefore, probiotics are live microorganisms which live in your stomach and keep everything ticking along as it should.

There are many different strains of probiotic, and the most common two you will certainly come across are lactobacillus and bifidobacterium.

Probiotics are suitable for most people, however it’s a good idea to check things out with your doctor before you introduce anything into your diet.

If you’re vegan, you should find a probiotic supplement which is vegan friendly (avoid anything with ‘lacto’ as the precursor to the word), or stick to finding probiotic content in your foods.

What Are The Plus Points of Probiotics?

Probiotics have been shown to help with a variety of different ailments, including:

Despite that, the single most powerful benefit a probiotic has is in regards to gut health, whether you have an issue in that area or not.

Can Probiotics Be Bad For You?

There is no solid evidence to suggest that probiotics are bad for anyone, but there are ongoing studies into whether or not too much probiotic can be a good or bad thing.

There is also the suggestion that because we don’t have much in the way of evidence either way, we can’t say for sure whether probiotics are safe or not.

A recent study by the Annals of Internal Medicine Journal found that although many studies have been undertaken, all have shown an extremely low amount of evidence to suggest there is any harm to be had from taking probiotics.

This is perhaps down to the fact that probiotics are naturally occurring in many foods, including yoghurt, kefir, sauerkraut, pickled foods, and dark leaves, such as kale.

The study therefore confirmed that overall, probiotics are a safe bet, but that doesn’t rule out interaction with a person’s present medical conditions.

For instance, you might be suffering from a certain type of stomach complaint (perhaps a leaky gut), you add probiotic supplements to your daily routine, and you begin to notice adverse effects.

In this case, this is a personal incidence, and for that reason, you should talk to your doctor before starting such supplements.

A person with a condition like a leaky gut, or anyone who has a low immune system due to chemotherapy, for example, should also double check with their healthcare team.

The reason for this is that the probiotic could instead be absorbed into the blood stream.

In this case, any bacteria which is supposed to live in the stomach or GI system might cause issues if taken to another part of the body.

This would then result in something called bacteremia, and you really don’t want that!

To sum it up, it’s dangerous to suggest that any type of supplement is beneficial and not at all harmful to anyone; that is really what the study is stating.

Whilst there aren’t any major amounts of evidence to suggest issues, that doesn’t mean there aren’t for certain individuals, and should be assessed on a case by case basis.

What Are the Side Effects Of Probiotics?

We should mention that side effects of probiotics are rare, but they do exist, and often comes due to either an allergy (very rare), or because the person has taken too much.

This can also be a period of time when the body is getting used to the introduction of a new supplement into the diet, and should therefore settle down over a short amount of time.

The most common effects in these cases are:

These symptoms can occur when a person starts taking probiotic supplements, or they can also be side effects.

If these symptoms occur and you have just started, and you know you’re taking the right amount, then it could very well be that they simply settle down once your body has got used to it.

The most common type of symptom, in this case, is likely to be bloating or an increase in gas, and this will be a temporary problem, which then sorts itself out as the benefits begin to kick in.

We mentioned a few earlier, but to give you a better idea of the foods you could chow down on:

As you can see, not all of these are easy to eat every single day, perhaps aside from yoghurt and cheese.

It is for this reason why many people choose to opt for a supplement instead, either in a tablet or a yogurt-based drink which is taken once per day.

There are countless products out there on the market, and it’s a good idea to shop around and read reviews before you choose the one for you.

As we mentioned before, there are also vegan probiotics, but you should always go for a 100% vegan friendly product, and check that it is not just ‘mostly vegan friendly, as it is sometimes the case.

Stick to the recommended dosage for that particular product, as some will vary in amount.

If you do this, you should not find yourself taking too much probiotic into your diet, and therefore shouldn’t experience any major side effects which are associated with an excess.

As we mentioned earlier, it’s also very difficult to get a huge amount of probiotic from food alone, so unless you’re living on miso or yoghurt all day long, you shouldn’t have any issues in that regard.

So, Are Probiotics Safe?

The lack of true evidence to suggest any harm or dangers of probiotics really make them quite a good option for overall health and wellness.

We cannot 100% rule out that probiotics aren’t going to cause some harm to someone, but those cases are likely to be very few and far between.

The benefits are therefore overwhelmingly in favour of trying probiotics and seeing how they work for you.

The best rule of thumb here is to talk to your doctor before you consider taking probiotics.

In that case, he or she can help you find the ideal type of probiotic for you, as well as warn you if you have any medical conditions which could cause an issue with absorption.

We mentioned that people who have a particularly low immune system, possibly due chemotherapy treatment, or those who have a leaky gut problem, may not be the best candidates.

The reason for this is the very low chance of the bacteria being absorbed into the blood stream, rather than staying within the digestive system, as it is supposed to.

Again, these are very rare instances, and are very few and far between.

Whilst we mention that, there is also some evidence to suggest that those with a moderately leaky gut could actually benefit from probiotics, which could help to form a protective barrier.

As you can see, we really need to assess the dangers of probiotics on a case by case basis, which makes it very difficult to make sweeping assumptions for the whole population.

Of course, continuing studies are ongoing, and professionals will always try and pinpoint down firm evidence on the dangers of any type of supplementation we take for overall health and wellbeing.

This should give you peace of mind that if any evidence does come to light, we’ll know about it.

The fact that probiotics are such a mystery, also means that there won’t be any shortage of continuing research over the coming years.

For now however, you can take your probiotic supplement in peace, safe in the knowledge that there are no firm dangers attached to them, and that you’re much more likely to benefit from the list of advantages.

Whether you opt for a yoghurt drink to enjoy in the morning, a supplement to take with ease, or a tablet which basically does the same thing, probiotics are certainly a big part of many people’s lives these days. 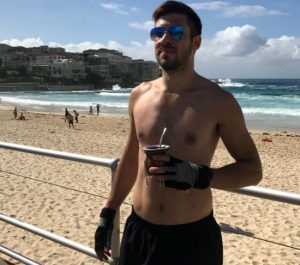 I'm passionante about sports and healthy food. I created the website "AZ Healthy Families" to enciourage the largest number of people to lose weight fast and hav a healthier life.